NOTHING BEATS BATANGAS "LOMI"
ONLY IN BATANGAS! Now would you look at that? Let us pause and marvel at this delicious-looking "lomi"--the pride of Batangas!

You might ask me, especially if you are not from the Philippines, the magic question: What is "lomi"?

Here is what I got from Google:
Lomi or Pancit Lomi (Hokkien: 滷麵/便食滷麵; Pe̍h-ōe-jī: ló͘-mī/piān-si̍t ló͘-mī) is a Filipino dish made with a variety of thick fresh egg noodles of about a quarter of an inch in diameter, soaked in lye water to give it more texture.
Because of its popularity at least in the eastern part of Batangas, there are as many styles of cooking lomi as there are eateries, panciterias or restaurants offering the dish. Variations in recipes and quality are therefore very common. LOMI RECIPE AND COOKING PROCESS
I. Prepare small pieces of meat (usually pork, sometimes chicken) and pork liver. They are thinly sliced then sauteed with garlic and shallots. It is then cooked until tender.
II. Next, salt, finely ground black pepper and other seasonings are added at this point. Then soup stock is added to prepare the broth.
III. Then, the lomi noodle and chopped cabbage are added.
IV. While waiting for the noodles to cook, a mixture of cornstarch flour blended with a small amount of water is added to thicken the soup.
V. Finally, just before the whole mixture is transferred to individual bowls, a beaten egg is added as the cook continuously stirs to complete the basic dish.
VI. Toppings include slices of kikiam (que-kiam), fish balls, sliced chives, cooked shrimp, and some meatballs. Sometimes stir-fried ground meat (pork or chicken), as well as coarsely ground garlic roasted to golden brown are also available.

SIDENOTE: Lomi is typically cooked using a deep wok on LPG gas stove. About 9–10 minutes is the cooking time for a single serving of lomi. 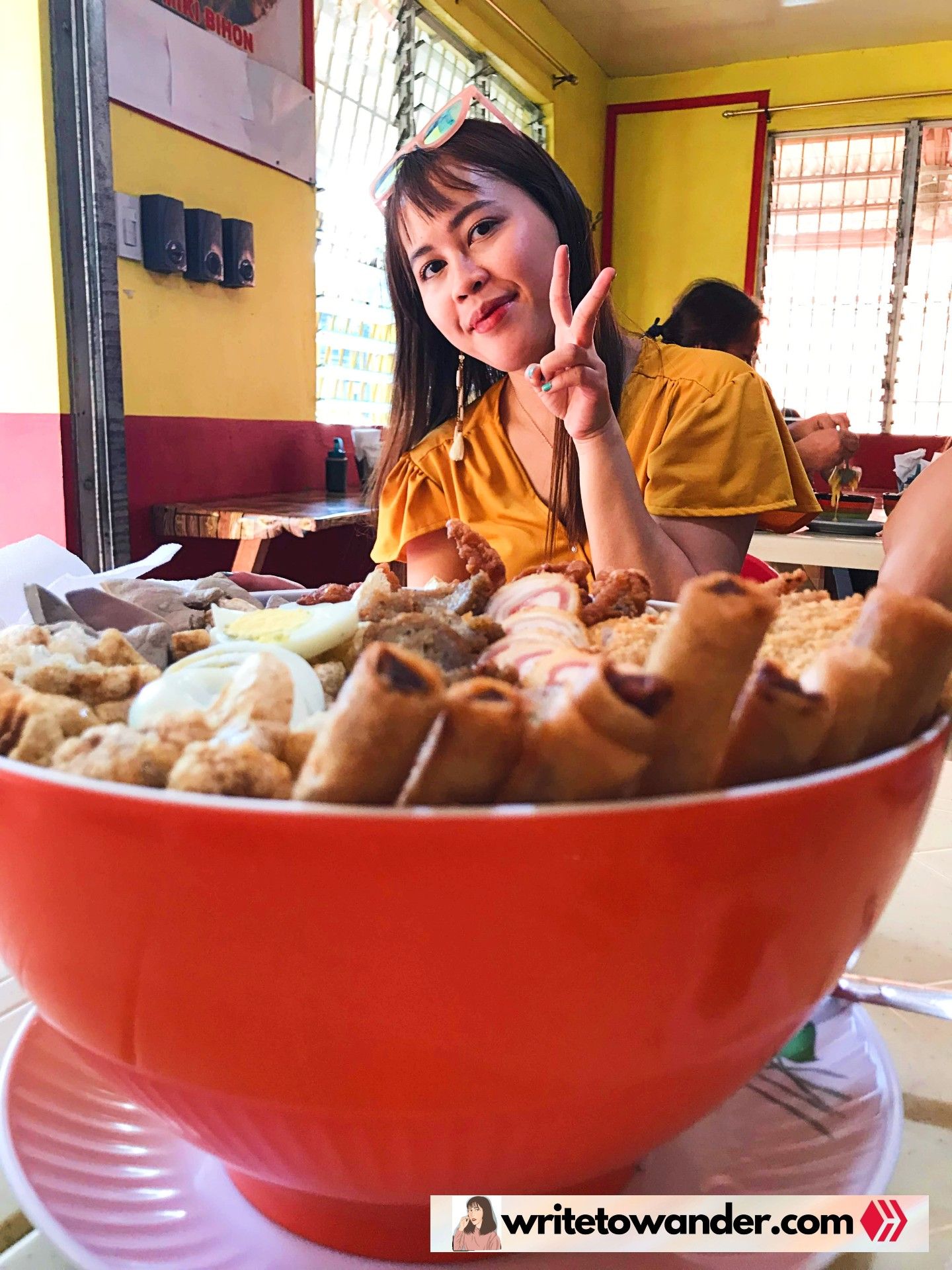 Here's me smiling in front of the AMAZING LOMI BOWL GOODNESS. I was so excited to eat because it was my first time seeing THIS KIND OF LOMI oh my gosh~~😍 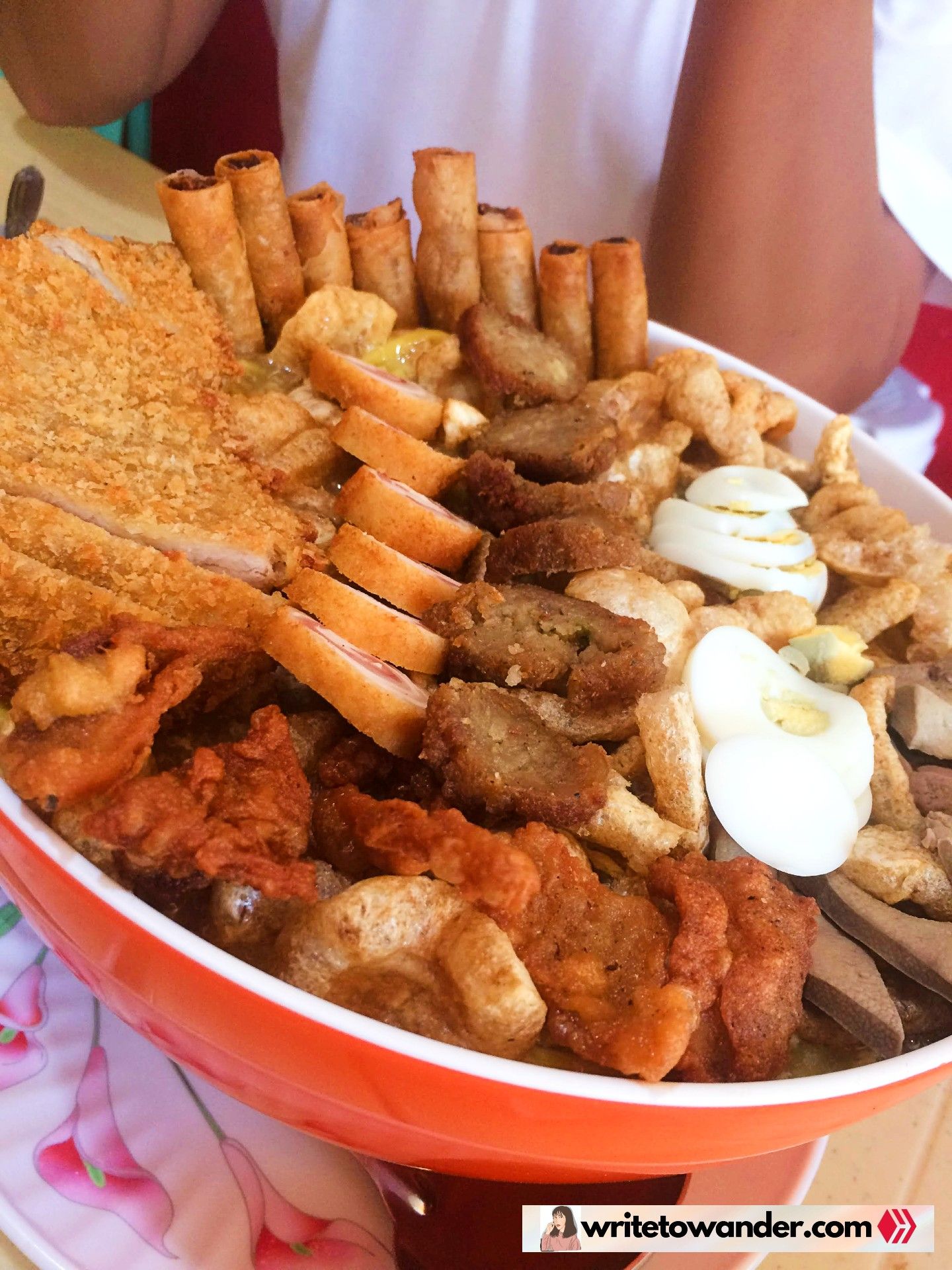 This one is the restaurant's LOMI OVERLOAD. It is good for four to six people at a very affordable (even cheap) price of 320 Philippine Pesos. My older-sister-from-another-mother Jasmin, her husband Junnel, his nephew, and I. All ready to eat our lunch. YAYYYY!!🤤 This is G2B Lomi House's Menu.👌

NOTHING BEATS BATANGAS "LOMI"
My Comments and Reaction

It was my first time to go to Batangas in 2018 so I haven't tried the well-known lomi-- their town's specialty! There are many kinds of lomi here in Cebu but they are not "extraordinary" and quite famous, unlike in Batangas. On my first day there, the Batangueno husband of my sis-bestie strongly suggested that I try their famous dish. He said proudly, "there is nothing that can compare to the lomi of Batangas". That truly piqued my interest. I CANNOT WAIT TO EAT, GEE~!! 🤤They looked for one of the best restaurants that serve the best lomi in town-- and we all got to G2B Lomi House. When this massive lomi bowl was served, my initial reaction was: WHAAAATTTTTT-IN-THE-WORLD. I honestly did not think that there are so many "toppings" to the point that I cannot see the noodles LOL. I WAS SO SURPRISED. When the three of them saw my face, they all laughed. My sis-bestie Jaz told me she had the same reaction when she tried this lomi for the first time. The two Batanguenos laughed and shared that it is the usual reaction of people who haven't tried eating Batangas lomi, and who have seen this overloaded lomi for the first time.

"Where is the rice?" I asked this. Way back in 2018, I used to eat a looot of rice HAHA. THIS QUESTION MADE THE TWO BATANGUENOS BURST INTO LAUGHTER. I was not really offended because I used to have rice with my lomi in Cebu LOL. They said that the noodles serve as the carbohydrate source of this meal, so there's no need for rice. That's just how lomi is eaten in Batangas (and also in the rest of the world who eat noodles. I guess it is only in the majority parts of the Philippines that people eat noodles with rice OMG HAHA.)

THE LOMI TASTED SOOOOOO GOOD~!!! 😭🤤😍 I am a lover of all things noodles so yeah I fell in love the first time I ate this. In Batangas, you eat this lomi with calamansi, siling maanghang (hot chilli) and patis (fish sauce). Reminiscing this food experience makes me want to go back there and eat HUHU😰

When in Batangas, it is imperative to try and taste their native coffee--kapeng Barako! This coffee is known to have a strong kick of caffeine, and it is healthier because it is not super processed so you get all the antioxidants! You also have to check out their locally-made and well-known Balisong or the Batangas knife. I brought these on my trip there. 👌 DID YOU KNOW? Kapeng barako (Spanish: café varraco) also known as Barako coffee or Batangas coffee, is a coffee varietal grown in the Philippines, particularly in the provinces of Batangas and Cavite. The term is also used to refer to all coffee coming from those provinces. Barako in the languages of the Philippines means "stud", and is associated with the image of masculinity. Barako has a strong flavour and fragrance reminiscent of aniseed.☕️🖤

Teaser of the Sightseeing Places: Lipa, Batangas
Took these photos while in the car. This is De La Salle Lipa. 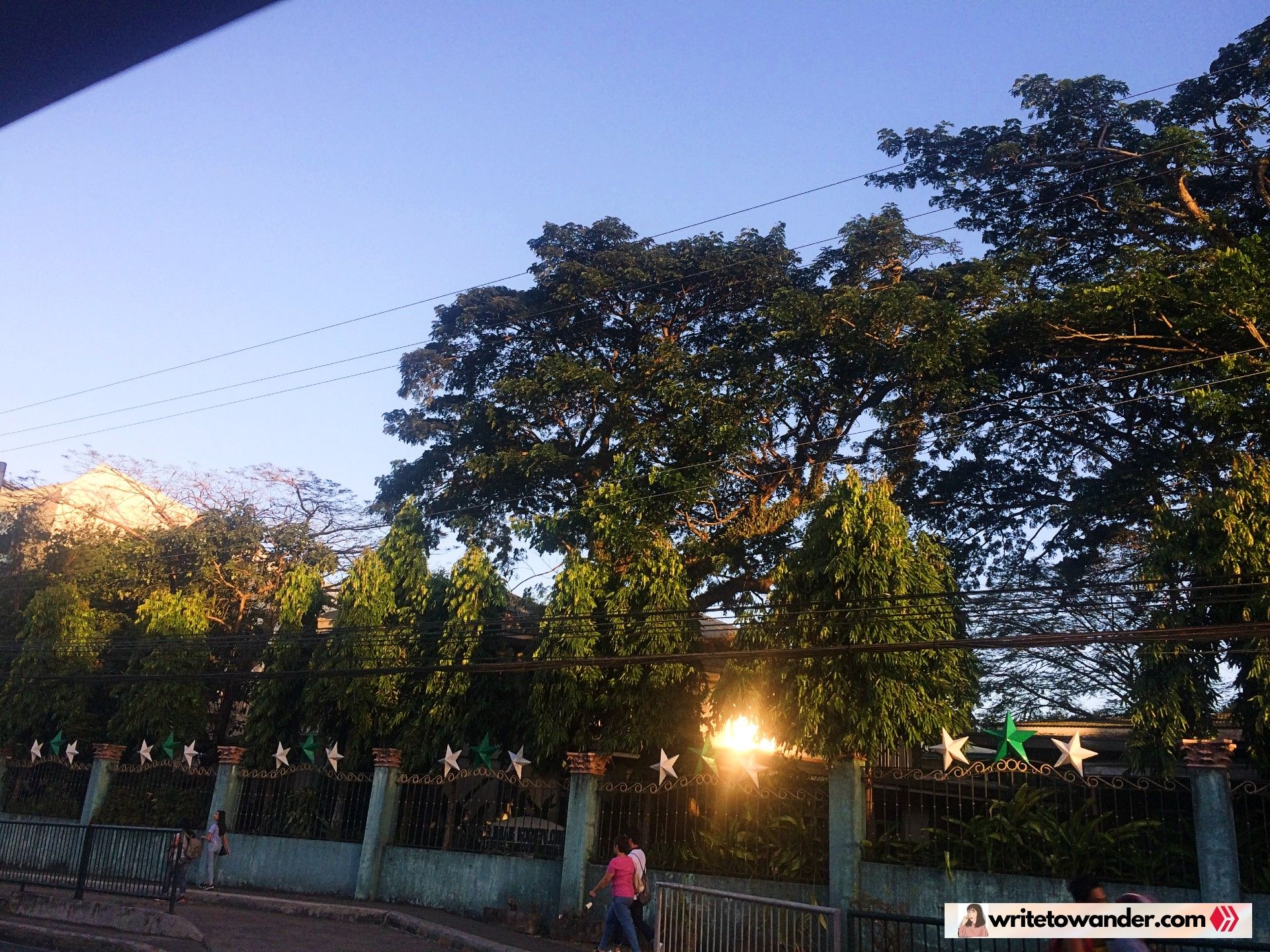 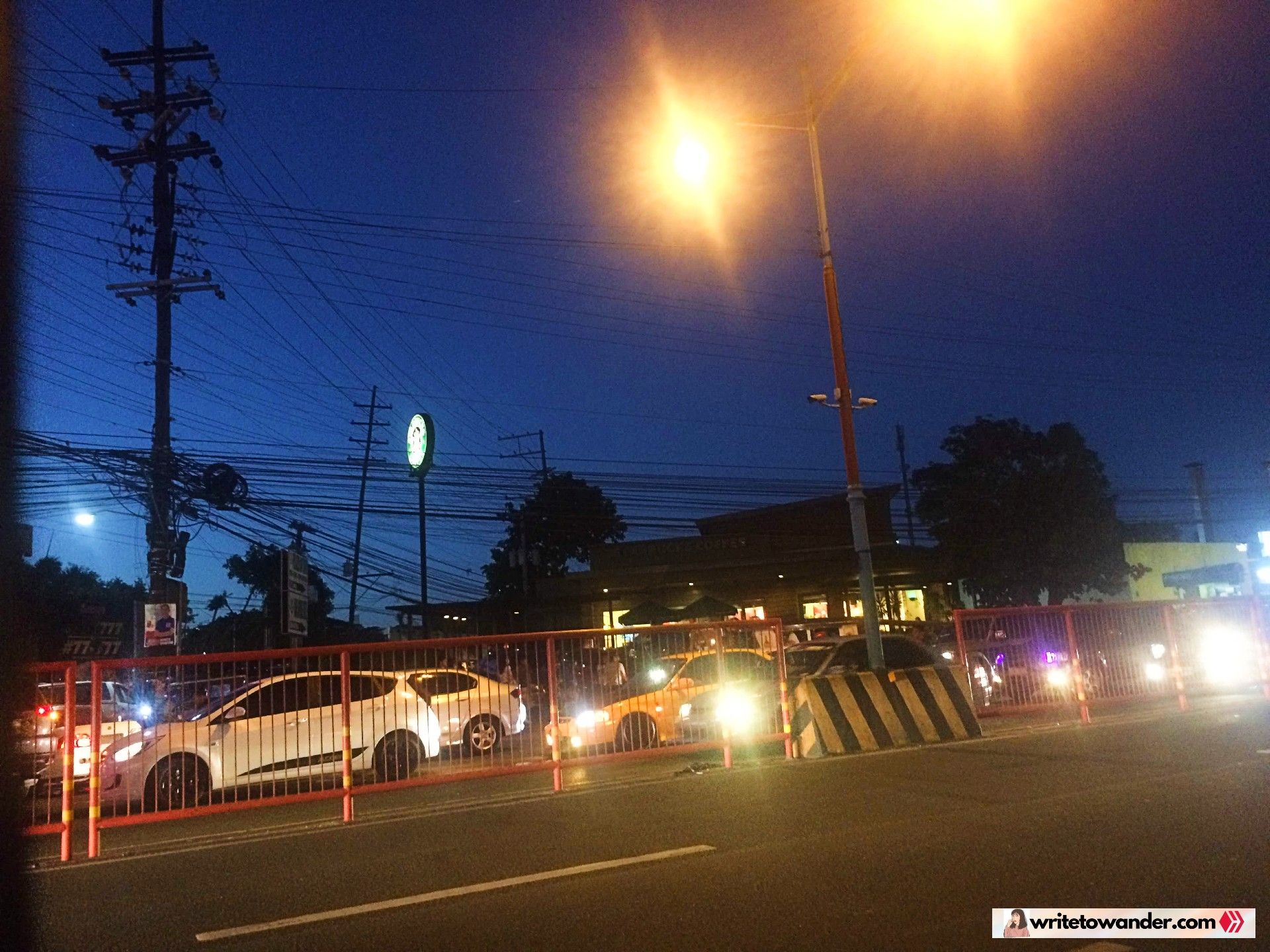 I MISS THE TRAFFIC. I MISS THEIR LOMI AND BARAKO COFFEE. I MISS BATANGAS.😭 I HOPE I CAN GO BACK AS SOON AS THE PANDEMIC IS OVER.😩

‘Til the next post, hivers! Remember that you are loved beyond borders and beyond time & space. Okay? Okay. 💛❤️ Hive-llo, everyone! Welcome to Jong's little buzz-y corner in Hive. Jong believes that every person she meets can teach her a thing or two (or three, or more) about life. She shares her love for life here-- the captivating beauty of life! To be more specific, but not necessarily in this order, she's interested in: wisdom, love, poetry, single life, books, travel, health&fitness, fashion, gratitude, unspoken hurts, heartbreaks and healing. Lastly, she loves Jesus. Why Mothers are Heroes: Appreciation Post on National Hero Day (Shoutout: Happy Birthday to my Mama!) a conversation with me, ten years from now 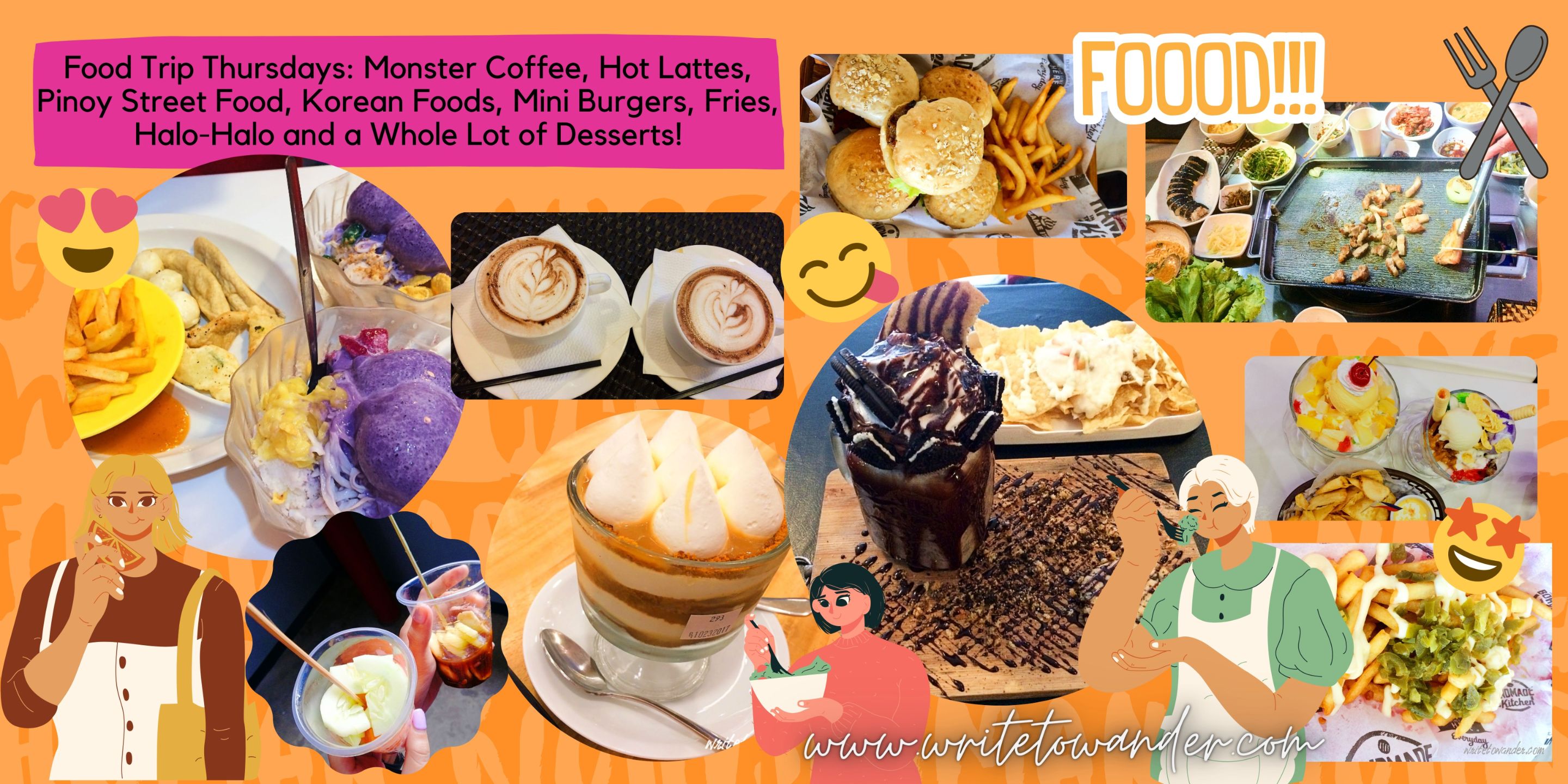 The Successful First-Ever Hive Meet-Up of my Co-Teachers | Hive Cebu Bloggers' Community is a Growing Family! 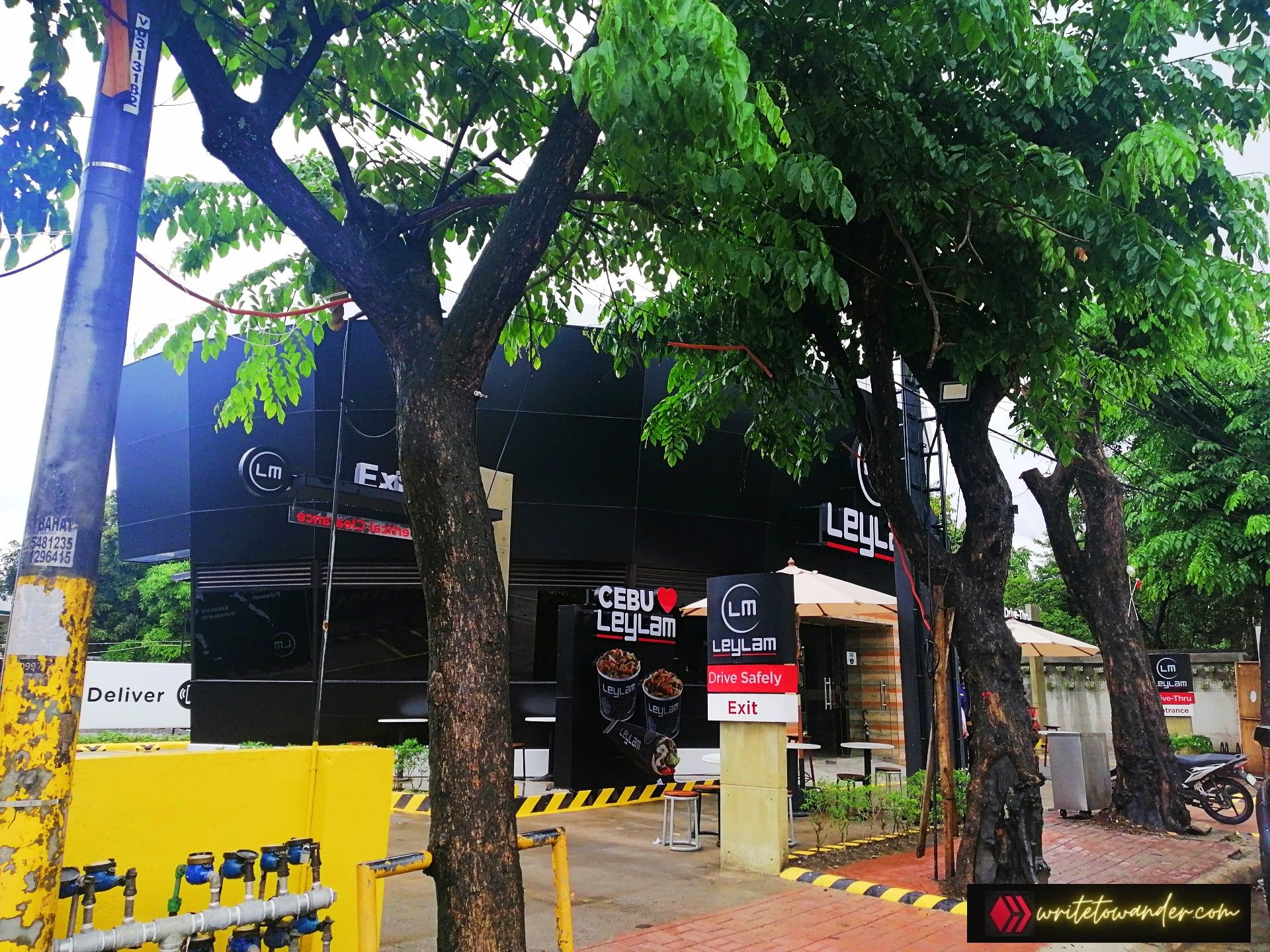 The First-Ever LEYLAM Shawarma Drive-Thru Store in Cebu (and in the Philippines) Is Now Open! For All Busy Working Shawarma Lovers, This One's For Us Hive-llo from Cebu! For Me, Hive Means...

Bridal Shower Went Wrong? But 'Twas Still a Fun Night, Or Was It Really?